A while back a random Twitter conversation alerted me to the HubbUK meet. Anyone who does any kind of adventure biking should know and love Horizons Unlimited but I have to admit I’d forgotten all about the real life, in person bike meet happening 16th -18th June.

With work commitments and a dwindling pot of funds, Howard and I decided the least we should do is go along, test the bikes (on the longest ride I will do before departure), glean some snippets from veterans (who we knew would be there), and get some training. For an extra £35 the weekend pass also gave is access to 4 hours of off-road training with Dave Knight and Lee Walters.

Not the best of starts…

Gertrude didn’t want to go; she decided to protest by leaking and consuming copious amounts of oil. Not good. We didn’t have time to fix what was wrong so just had to go but with extra oil supplies. The bad start didn’t get much better…

After leaving so late, having to stop regularly to check Gertrude’s oil and riding in the rain, eventually we admitted defeat, pulled into a B&B and preyed they had a bed. It was a short snooze before the early rise for the off road training.

Had to admit I didn’t know who Coach Stroud, Lee Walters or David Knight were before the event. Of course now I feel slightly privileged to have had so much time with them all.

We learnt the basics; position on the bike, standing, cornering, riding a ridge or gully. Then hit the real stuff – a training course full of mud and challenge by choice obstacles.

It was so hard and so fun all at the same time. I was exhausted and sweaty after just two rounds (dropping my bike is exhausting!) and Howard wasn’t much better. In fact, we agreed that when it came to the off road, I’d done better!

David and Lee were amazing instructors; if we had the time and money we’d both be signing up for a day on the Isle of Man with David or heading back to Wales with Lee, just for fun, not because we had to for the trip!

David Knight strutting his stuff on the course 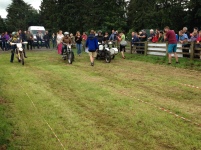 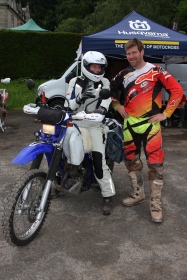 Me and my new idol

How not to look on a bike

Oh dear. Much of this to come

One thought on “What a weekend @ HUBBUK”